Hill leads the way at the 2019 season opener at Silverstone 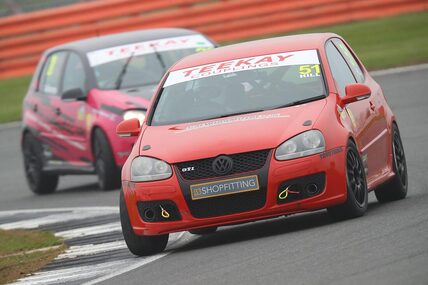 Simon Hill made it an immaculate start with a brace of wins
Qualifying was a fraught affair and somewhat interesting to watch, as most drivers got back into the groove after the winter break. Watching the positions change order so frequently was exciting and made for what were two very entertaining races.

Race One saw some grass tracking and trips to the gravel, some spins and pirouettes, and that was just John Mawdsley.
​ 🙂
Simon Hill led from lights to flag, with James Colbourne keeping him honest. Martyn Walsh, James Howlison and Simon Vercoe battled it out for second and third, whilst Adam Hance, Richard Marsh and Peter Elliston stayed in touch.

Within the MK2's Chris Webb romped off into the distance, with Pete Milne, Matt Eccles and Spencer Beale hot on their tales. Tim Hartland decided that the National Circuit wasn’t interesting enough and went for a gander at the GP part of the track, returning to eventually work his way back up to fourth, displacing the young Spencer Beale on his debut. 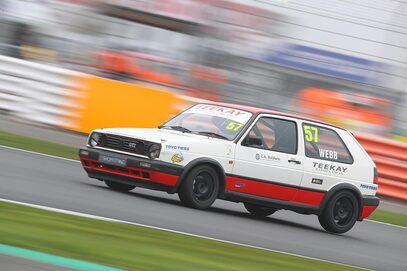 2017 Champion, Chris Webb took the win in race one.
Race 2 was pretty much a carbon copy of race one for the MK5 class, however this time Hill and Colbourne were much closer, and Walsh despite his best efforts, was still dreaming of the new Argentinian Malbec on offer at Waitrose, managed to retain third ahead of the fast paced James Howlison, Vercoe, Adam Hance and driver of the day, Peter Elliston.

Matt Eccles rocketed off in the damp and led from lights to finish. Captain Milne and Mr Hartland pushed hard to catch, with Chris Webb and Spencer Beale staying in touch.
​
A great weekend racing ladies and gentlemen, so good to be back and already looking forward to Croft which poses a new challenge to all the PGTI gang, as it’s our first visit in the ten strong years of PGTI.