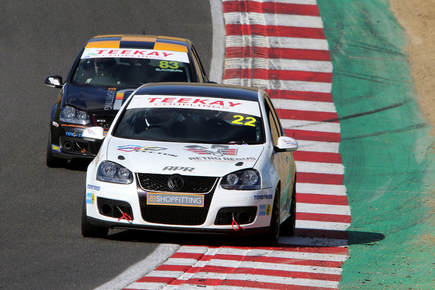 Adam Hance managed to claim pole position in the MK5 class
The penultimate race weekend for Production GTI was at Kent's historic Brands Hatch circuit. Now with the championship points table getting tighter, both the MK5 and MK2 classes were up for grabs .With Tim Hartland heading up the MK2 class and James Colbourne topping the MK5 table, it was all to play for.

It was the returning Nick Porter who topped the MK2 grid, grabbing pole position, with a fully functioning car, having previously been cursed with an unfathomable misfire, which now looks cured thanks to Mr Porter Senior and his wealth of Knowledge in the iconic MK2s. Adam Hance topped the MK5 Grid, just ahead of the returning Simon Hill from his 4 weeks modelling contract in Majorca and the constantly improving Paul Blackburn. 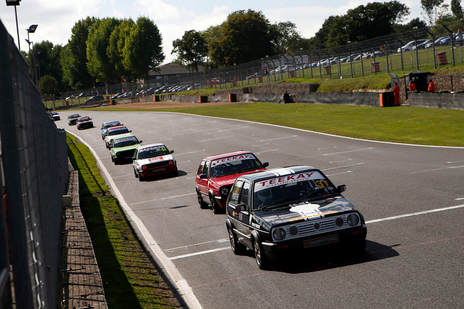 The returning Nick Porter had an immaculate day with pole and two race wins.
In race 1 it was Hill, who got the jump on Hance from the lights. Hill led the entire race, with Hance glued to his rear. Blackburn managed to fend off the advances of John Mawdsley and James Colbourne to secure 3rd spot. Hance was unable to pass Hill despite wearing his Lucky pants.
​
In the Mk2 Class, it was Nick Porter who led from lights to flag, with Hartland in a comfortable 2nd. The usual magnets glued Milne, Webb and Gibbs together for what proved another fantastic spectacle for the crowds as they battled door to door and bumper to bumper for 20 minutes. It was Milne who eventually came out on top in the MLP Development car, to take the final podium spot, behind Hartkand in second the class winner Porter. 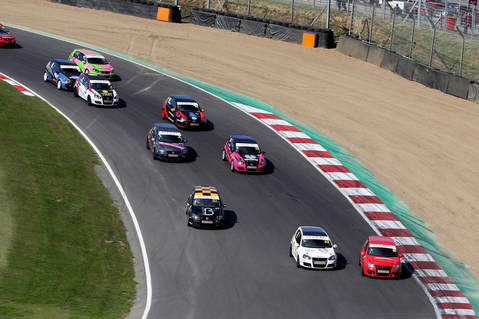 The MK5s streaming and sliding down the infamous first corner, Paddock Hill
Race 2 was another 20minute race, so the stock of Lucozade and Red Bull, were drained in the Brands Café. It was again Porter who led the MK2 class, and was not put under any pressure for the entire race as the trio of Webb, Milne and Gibbs went at it again. It was an amazing display of close, exciting racing with zero contact from the three. It was eventually Webb who managed to find a way past Milne, and despite his best efforts, Gibbs threw everything he had to follow Webb, however the Skyman had him covered. 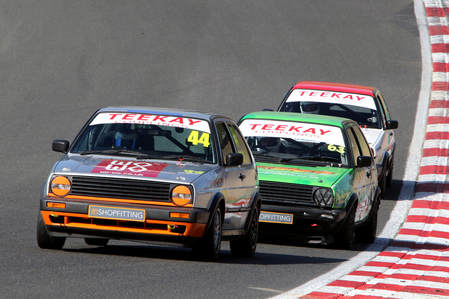 Usual nose to tail action throughout the field
Hill made it a double with his second win of the weekend in comfortable style, however it could have been tougher had Adam Hance not decided to exit stage left and join the GP loop on lap 4. That allowed James Colbourne to inherit second and Richard Marsh third, after an early battle with Altay Ali. Paul Blackburn and John Mawdsley meant the Bristol man came out on top. Hill won, Cobourne finished 10 seconds behind and March took third.