Rain, Sun and sea. PGTI's first ever trip to the North Wales track had everything 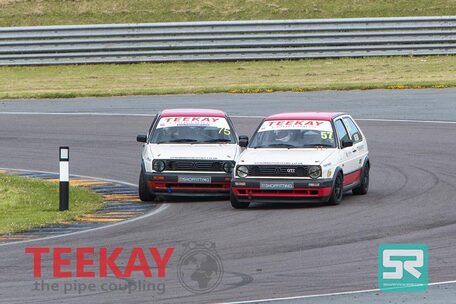 Senior and Junior Webb battle it out at Anglesey
For the second meeting in a row it was the Championship's first ever trip up to the fantastic Anglesey track. What was also a first was a triple header, so the pressure was on as there was even more points up for grabs in both the MK2 and MK5 classes.

Qualifying was in the wet on Saturday and Simon Hill in his red MK5 Golf had his best wet suit on putting it on pole position by over 1.8 seconds. Current MK5 champion James Colbourne was second on the grid with Martyn Walsh in third. Within the MK2 Class Pete Milne claimed pole with current MK2 champion in second and 2017 champion Chris Webb in third.

Race one was also held in the Welsh rain and wet weather master Simon Hill ran away with it, winning by 13 seconds which is rare to see such a gap within Production GTI. Simon Vercoe managed second and James Colbourne third, just holding off Paul Blackburn and Martyn Walsh. 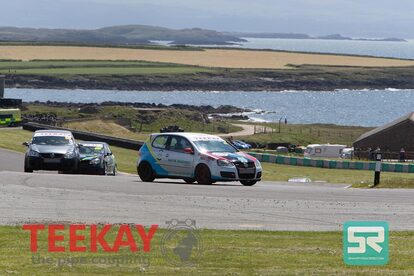 Sun, sea and a race track, what better way to spend a Sunday!
Race two and three were held on Sunday in dry conditions. This meant Simon Hill was not able to trot into the distance. Simon Vercoe and James Colbourne stayed on his tail in both races, but could not do anything to get past him and both races finished as in the wet, with Hill winning, Vercoe second and Colbourne third.

​While in the MK2's Milne could not follow on with the success from Saturday and Tim Hartland took a brace of wins in the dry on Sunday. In the Webb took second position in race two with the ever improving Spencer Beale third. In race three Luke Haberman took his first ever podium with a second and Beale made it his second third position of the weekend.

The Championship now goes back to more familiar grounds for the next meeting at Snetterton on the fast but technical 300 layout.