Simon Hill bagged pole position in his MK5
With 8v championship wrapped by Matt Eccles a couple of rounds ago, the 16v championship was still up for grabs. It was only between current 2016 champion Chris Webb and Dan Gibbs.

​What was supposed to be a snippet of an Indian summer the early qualifying session was met with misty, light rain. However that didn't stop 2017 debutant Peter Milne putting the cat amongst the pigeons by putting his MK2 16v on pole with Rusty Laidler doing likewise in his 8v. Simon Hill managed the quickest time in his Mk5. 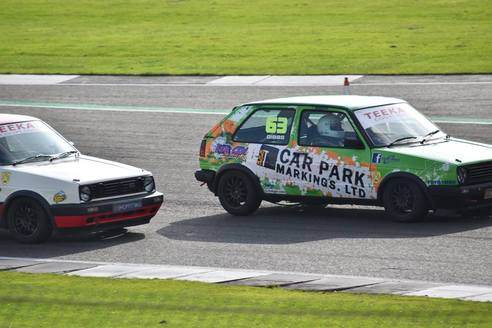 Race 1 in the MK2's saw an epic battle between the two championship contenders
The weather had improved for Race one and Martyn Brown made full advantage of his great start by leading the first few laps before Pete Milne took the lead down Hanger Straight. Webb and Gibbs caught and over took Brown, but then continued to have a race long battle with a late charge from Tim Hartland up to third, only to lose out to Dan Gibbs on the last corner. It finished with Milne taking the win, Webb in second and Gibbs in 3rd.

In the 8v class, it was a three way battle from lights to flag, going three abreast down Hanger straight but it was the already crowned champion Matt Eccles who added to his tally of 2017 wins with pole man, Rusty in second and Luke Haberman taking 3rd.

In the MK5s, Jon Mawdsley took an early lead from the lights closely followed by fast starter, Martyn Walsh. A three abreast drag race down Hanger straight with pole sitter Simon Hill joining in ended with Hill claiming first position which he didn’t lose to the chequered flag. Mawdsley and Walsh battled for the several laps until unintentional contact caused them both retire leaving Altay Ali to take second from a hard charging James Howlison in third. 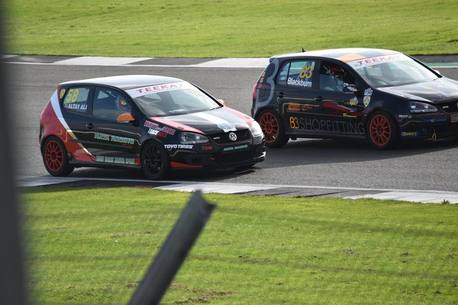 Blackburn fended off Ali to claim his first ever race win!
​On to Race Two and in the MK2’s, Chris Webb claimed his back to back championship in style by taking the lead on lap 1 to the chequered flag. Pete Milne battled hard to claim his second podium of the day by taking third place but drive of the day has to go to Nick Porter who started from the back of the grid due to race 1 mechanical issues and managed a spectacular 2nd position.

In the 8v class the race of the day was between Luke Habberman and Eccles who swapped places lap after lap, with Habberman coming out on top for his first ever win!

In the MK5's Paul Blackburn took the lead via a lightening start. Ali and Hill battled initially for 2nd with the former eventually getting past on lap three. Hance who started from the back of the grid battled with Howlison and Hill for 3rd. After going three a breast into Club, it was Hance who came out on top with Howlison dropping back to 6th after going wide. Hill dropped out shortly after with mechanical issues.

Ali was closing in on the runaway leader, Blackburn, however when the flag dropped the order remained the same with Blackburn taking his first ever well deserved win, Ali second and Hance in third.

So that’s the 2017 season wrapped up with Chris Webb taking the 16v championship again for the second year running and Matt Eccles taking the 8v.

2018 is already looking like its going to be a stella year with lots of MK2’s rumoured to come out of ‘retirement’ and multiple MK5’s in build. Early conversations have started around the race calendar with details hoping to be revealed in December, ready for the Autosport show in January!