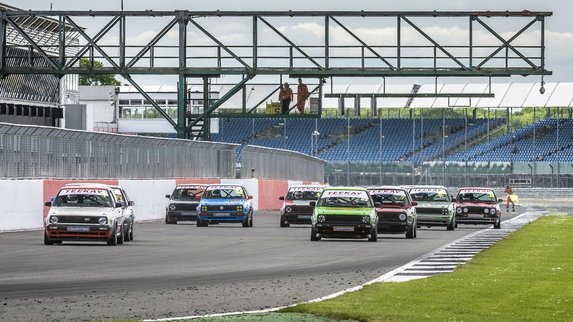 Chris Webb leads the MK2's into the first corner
The second meeting of the 2017 Teekay Production GTI MK2 Championship and MK5 Series took place at world famous Silverstone Circuit, on the National layout. All the racers were hoping for a dry meeting as our previous two meetings at the Northamptonshire circuit were abnormally wet with boats being more suited to the conditions rather than iconic hot hatches. Fortunately the hopes and wishes came through as it was dry and warm all day, with qualifying and both races taking place on the one day,

Qualifying was as tight as ever with less than a second separating the top eight MK2 Golf's and second across the MK5's. Within the MK2's, it was 2016 Champion, Chris Webb on pole closely followed by Nick Porter and returnee Dave Parris. New boy Kevin Glover hit the ground running in his MK5 by bagging pole, but another newcomer Dan Rose was right behind him in his new MK5. 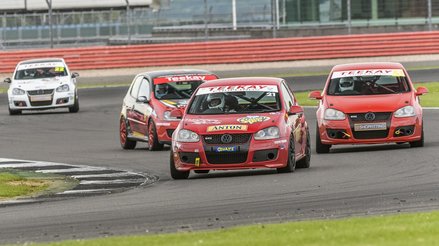 Newcomer to PGTI, Dan Rose took a brace of wins in his MK5 Golf GTI
The MK2 Golf GTI Championship

Both races displayed the closest and safest fought out battles for the top three slots in years. Anyone one of five drivers could have have won either race. Newcomer to Production GTI, but with years of experience, George Haynes took race one win with Chris Webb following closely behind and Brian Reed right on his back bumper to take third spot. Race two was very similar but with a shuffle of positions. Webb took the win with Haynes closely following and Dave Parris in third. Within 8v class, Matt Eccles maintained his winning streak in race one with newcomers for 2017, Rusty Laider 2nd and Luke Haberman filling the 3rd spot on the podium. Race 2 the order was swapped around with Laider taking the win, followed by Haberman and Eccles in third.