Webb and Walsh start the season with double wins a piece 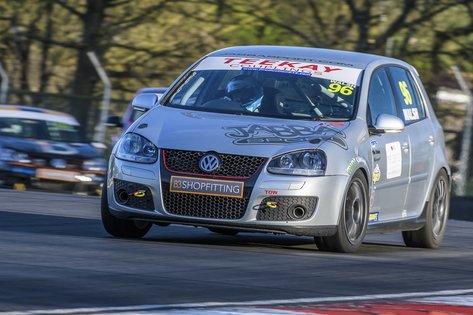 Walsh took his MK5 to a brace of wins
The first meeting of the 2017 Teekay Production GTI MK2 Championship and MK5 Series was bathed in abnormal hot weather, at the infamous Brands Hatch circuit in Kent. With qualifying and all the racing taking place in one day, drivers were treated to different track temperatures throughout the day, whilst the spectators treated themselves to some vitamin D no matter what the time!

Qualifying was tight with less than a eight tenths of a second separating the top seven MK2 Golf's and second across the MK5's. Within the MK2's, it was consistently quick Nick Porter who bagged pole, followed by 2016 Champion, Chris Webb, with ever improving Dan Gibbs in third. Matt Eccles took 8v pole by default as the only class runner, but logged some respectable times, bearing mind he had only driven on track once before the qualifying session!

James Howlison took his first ever pole in his red MK5, closely followed by Paul Blackburn in his DSG (automatic with paddle shift) Golf. 2016 Brands Hatch winner Martyn Walsh rounded up the top three on the grid. 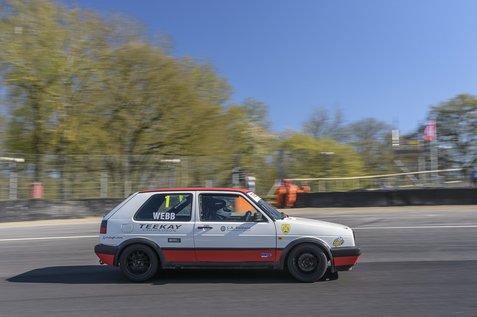 Webb started his defence of his 2016 championship in style
Race one started smoothly as they always seem to do in Production GTI, with Paul Blackburn taking advantage of James Howlison's slow start within the MK5s. After some crowd pleasing, but clean battling throughout the race, Walsh started to come on strong and picked them off one by one to make his way to the front, where he led to the finish line. Within the MK2's it was a clean getaway for Nick Porter who led for the majority of the race until gearbox issues led him to only have third gear, dropping him down the order. This left Webb to take the honours and start the defence of his championship in the best way possible, with a win. Newcomer to Production GTI, Paul Burt claimed 2nd and new to the 16v class, Dave Aldridge took 3rd. Matt Eccles took 8v class win in his first ever race and Nathan Leigh also successfully completed his first ever race in his 16v.

Race two again was a clean start for everyone. Within the MK2's it was another newcomer to Production GTI,  Brian Reed who led the field, with Webb right on his back bumper. After several laps of clean dicing, Webb managed to squeeze past and then kept in front to chequered flag. Gibbs also managed to get past to finish 2nd with Reed holding 3rd. Eccles again defied his class and battled well with the 16v's through the race. Within the MK5's, it was a lights to flag victory for Walsh, but he didn't have it easy with Howlison right on his tail throughout and crossing the line less than a second behind. Blackburn again finished off the MK5 podium with a 3rd. Finally one man who was chuffed to bits with his weekend of racing, was Teekay Couplings owner and racer Ian Webb. Not because of his finishing position but because of achieving his long term goal of dropping his Brands Hatch lap times below one minute. Well done Ian!!

​So a fantastic start to 2017, with new and old faces, some in different cars, but all racing competitively and cleanly, which was shown by not one stoppage or Code 60 flag throughout the day. Roll on to Silverstone at the end of May where we will be joined by more MK2 and MK5 Golf GTI's as they finish their builds!