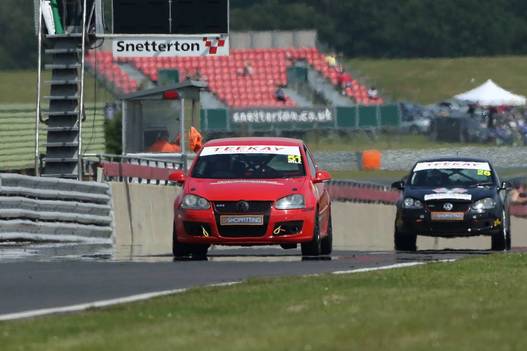 Simon Hill scored a brace of wins with James Colbourne closely following in both races.
After a grey start, the Norfolk sunshine blessed the Snetterton track for rounds three and four of the 2018 Teekay Couplings Production GTI Championship.

In what was a close qualifying session the MK2 16vs were out in force and it was Tim Hartland who pipped Peter Milne to pole position by a few tenths, closely flowed in third by 2017 PGTI champion, Chris Webb.

In the MK5 class, James Colbourne continued his top form from rounds one and two as he took Pole from Martyn Walsh, and Simon Hill.

The three newcomers to Production GTI, Ryan Sayer, Tim Parsons and Cliff Brindley all put in very competitive qualifying times within their respective classes and for Tim it was the first time out on track full stop. 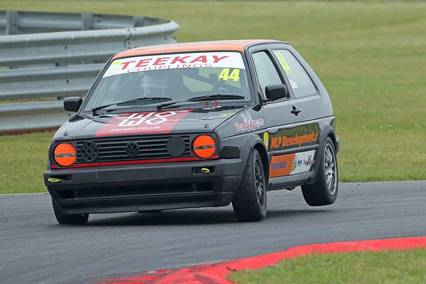 Pete Milne took victory in both races.
​In race one, Hill and Colbourne battled for the first few laps, with Hill eventually taking the lead with a great overtaking move around the outside into the Brundle and Nelson complex. However Hill didn't pull away from Colbourne with the latter keeping the pressure on until the flag. Unfortunately Walsh didn't make the grid after pulling off after the green flag lap for a minor mechanical issue. Starting from the pitlane he managed to work his way through the grid, to finish an excellent 7th.

Within the MK2 class the battle between the trio of Peter Milne, Tim Hartland and Chris Webb was keeping the sun drenched crowds on their toes as the threesome raced bumper to bumper for full 20 minutes. With Milne leading, a mistake by Webb on the final lap unfortunately caused him to spin and take Tim Hartland with him. This left the door open for an opportunistic Dan Gibbs to temporarily take second place. All of this allowed Milne to drive off into the distance and confirm the win. Webb and Hartland continued to the line, with Hartland managing to reclaim second from Gibbs, relegating him to the final podium spot. 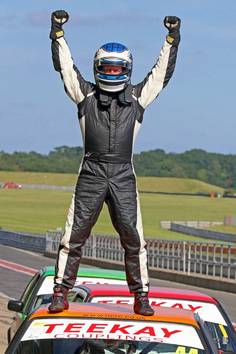 Pete Milne celebrated in style and gave his panel beaters some work to do
In Race Two, Pete Milne again took the victory in the MK2 class but Tim Hartland was not going to make it easy and even led for a lap after pulling off a daring overtake going into the Esses. However it wasn't going to last, as a braking issue led him to lose control on the following lap and drop to the back of the field. This allowed Milne, to recapture the lead with Webb following in hot pursuit. Despite several attempts, Webb couldn't find a way around the in-form Milne, who took his second victory of the day. Dan Gibbs again took 3rd place.

Within the MK5 class, Hill again took the win with a lights to flag masterclasss, but was closely followed for the whole 20 minutes by James Colbourne, and James Howlison which again is how they finished. Martyn Walsh joined the train after getting past Adam Hance and Paul Blackburn in the first couple of laps. The battle for 6th and 7th place was a fantastic four way fight between Altay Ali,newcomer Ryan Sayer, Kevin Lloyd and Dave Parris putting on a spectacular show for the spectators.


With their brace of wins each, Pete Milne and Simon Hill are now leading the MK2 and MK5 Classes respectively and the Championship moves onto the exciting Rockingham on Sunday 24th June.