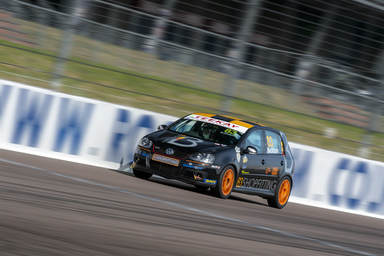 Paul Blackburn scored his first ever Pole Position followed by a race win
The sun shone on Wolfsburg's finest for Rounds 5 and 6 at Rockingham. With a combined grid of 20 cars, it was the usual protagonists who battled in qualifying for the front row of the grid. In the MK2 Class, Tim Hartland eventually came out on top, with 2017 Champion Chris Webb in second and Pete Milne claiming the third spot on the grid.

In the MK5 qualifying, the the number one position changed no more than five times, with Simon Hill, John Mawdsley, James Colbourne and Martyn Walsh all holding pole position at some point, until Paul Blackburn banged in a his best time to take his first ever pole position. Walsh ended up second with Mawdsley 3rd who was sharing his car with his son, Simon, meaning Mawdsley senior would compete in Race 1 and junior starting from the back of the grid in Race 2. 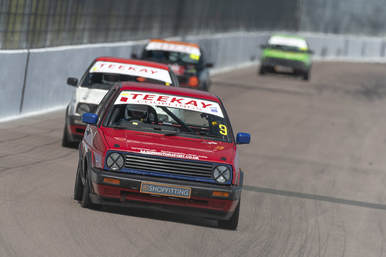 Tim Hartland took a brace of wins in his MK2
As the temperature increased, it was becoming obvious that tyre management was going to play a large part in both races. It was Blackburn, the pole sitter who led from lights to flag in the MK5 class, however it was far from a lonely race for him with a five car train less than second behind for the whole 20 minutes. After some fantastic close and clean racing it was Hill who finished 2nd and Mawdsley Senior taking third, but that only tells half the story with constant battling taking place lap after lap to produce one of the best races we have seen in the Championship.

The MK2 class was also full action as usual, in the form of Tim Hartland leading from the very fast charging Chris Webb and Peter Milne, with Dan Gibbs ready to pounce in fourth place. However it was an amazing overtaking move from Hartland which led to him leading the race and the eventual win. Sadly a mistake by Milne on the exit of Gracelands led to contact with the tyres and his retirement. This allowed Hartland and Webb to increase their lead and Gibbs to capatilise to take third position. Webb couldn't get past Hartland and finished in second place. 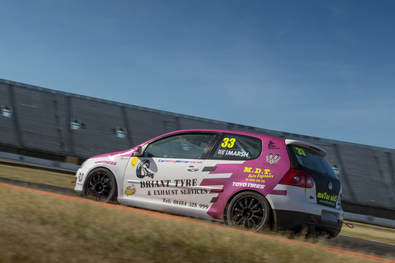 Newcomer in his MK5, was Richard Marsh
Unfortunately the damage incurred to Milne's car was too much for his Team MLP Developments to get ready for race two, but looking on the positive side, it did allow them to join the the rest of Production GTI drivers, teams and families for a burger and watch the England v Panama world cup game, that they may have with some margin!

After the Football, and the amazing result against Panama, Blackburn lined up on pole position ahead of Hill and Walsh, who was promoted to third as Mawdsley junior took the over the driving duties for race 2 from his father, therefore started at the back of the grid.

It was Blackburn again who led from the lights in the MK5 class, however the group behind were a lot closer compared to race 1, consisting of Walsh, Hill, James Colbourne and Adam Hance. Hill sadly retired on lap 2 with a mechanical issue, leaving Walsh to try attempt to take Blackburn from the top spot. In a move that took three corners to complete, Walsh eventually got past Blackburn and after several attempts, Colbourne followed finishing second. Blackburn managed to hold off the advances of Adam Hance and James Howlison to retain 3rd place and his second podium of the day.

A reduced MK 2 grid, with Milne not making race 2, meant it was up Tim Hartland, Chris Webb, Dan Gibbs et al to shine. As usual, they did not disappoint, with Hartland fighting off the 2017 champion Webb to take his second victory of the day and Gibbs in third.

Production GTI now heads to the exciting spectator's favourite, Castle Combe to support the ever growing UK TCR series on the 14th of  July.