The 2018 season opens with a wet bang at Oulton Park 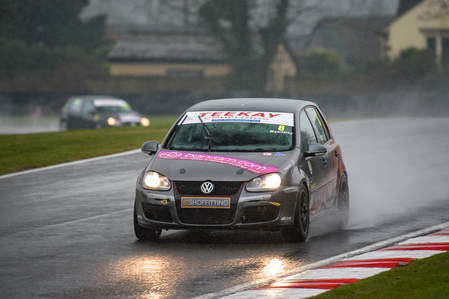 John Mawdsley took Race 1 win the MK5 Class
The weather, played its part to mix things up for sure for the first rounds of the Production GTI Championship at the picturesque Oulton Park.

​Torrential rain during qualifying sorted the men from the boys. In the MK2 16v class, Pete Milne, headed up pole for nearly all of the session until the recently married Nick Porter pulled one out of the hat on the final lap of the session to take pole. 2017 champion Chris Webb was way down the pecking order after his tyres parted company with the tarmac, and his car had a minor argument with the Armco. Subsequently, Webb was unable to continue the session and with driveshaft and wishbone damage, this would see the current Champion miss this Race 1 too.

Within the new MK5 Class, points are now up for grabs and in qualifying it was the new father and extremely knackered, James Colbourne who took pole from the PGTI veteran and everyone's favourite uncle, John Mawdsely. Adam Hance managed to qualify third spot.

Race 1 in the MK2's saw Porter convert his pole into a race win, with Tim Hartland closely behind. After a coming together at one of the fastest parts of the circuit Dan Gibbs fell back and Pete Milne retired as he brushed the armco.

Within the MK5 Class, Race 1 featured a race long battle between Colbourne and Mawdsley and it was only a mistake which let Mawdsely take the checkered flag first. Local man, Simon Hill finished off the podium in third. Paul Blackburn in his DSG equipped MK5 came third ahead of PGTI's favourite cockney, Martyn Walsh

New to the PGTI clan for 2018 was Kevin Lloyd and Graham Heard who acquired themselves with pride after battling from start to finish lap after lap. 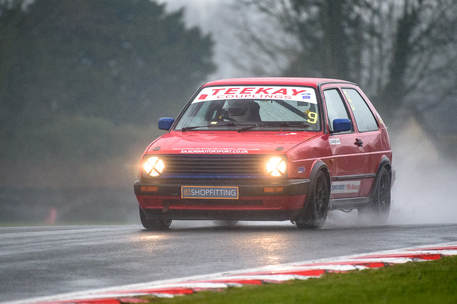 Tim Hartland took Race 2 win in the MK2 16v Class
Race 2 saw a dry track but any small mistake off the black stuff would be punished severely with muddy and wet grass. It was Simon Hill who made the best start, clearly his afternoon cup of Horlicks and tai chi session paying dividends. After making his way through to lead James Colbourne for most of the race until a mistake was capitalised on by Colbourne who managed to fend Hill off as well the fast charging Walsh. Race 1 winner John Mawdsley managed a safe 4th from James Howlison who was closely followed by Paul Blackburn and Adam Hance who were bumper to bumper for much of the race.

In the MK2 16v class Pete Milne managed to recover some points after the disappointment from Race 1 and took second from the ever improving Tim Hartland. Dan Gibbs took the final podium from a lonely Matt Eccles after Nick Porter retired with a technical issues and Chris Webb sadly did not start after his starter motor decided to sparkle like it was November 5th whilst on the warm up lap.