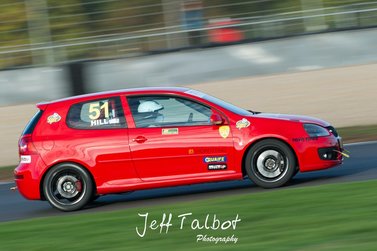 Simon Hill managed to claim pole position in the MK5 class
Donington played host to the 2018 season Finale for production GTI and the Midlands circuit did not fail to excite. Qualifying started early doors on a bright sunny Sunday morning and after 2 laps it was Paul Blackburn who was fastest, closely followed by the returning Dean Clayton, who made a welcome return to the PGTI fold. Unfortunately the session was stopped on lap 3 after Paul Blackburn was involved in a high speed car to scenery incident. Fortunately Paul is made of stern stuff and after a short trip to hospital was released with a few aches and pains. Part Deux of qualifying saw Simon Hill take pole in the MK5 class, from John Mawdsley and Adam Hance. James Colbourne , who led the championship into Donington, a few rows down in 5th. It was the ever improving Dan Gibbs, who took pole position in the MK2 Class, after a strong qualifying session, saw him edge Tim Hartland and Chris Hart by an impressive 7/10ths and 1.2 seconds respectfully.

With it all to play for in the championship for both classes, Chris Webb needed to win both and set fastest lap and Tim Hartland required a disaster in order for Webb to retain the title, and Simon Hill was required to win both races and set fastest lap, with Colbourne finishing lower than fourth in order for Hill to secure the first MK5 PGTI title. 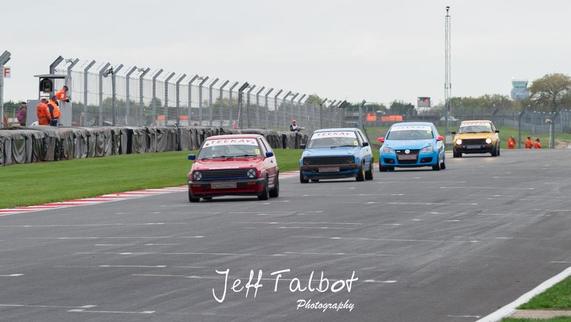 Tim Hartland secured the 2018 Championship in Race One
Race 1 started without drama, and as the grid thinned on the exit of Craners, it was Hill who led, from Mawdsley and Hance. In true MK2 style, Webb, Milne and Hartland all tussled for the front, with Milne holding first for a few laps, before Webb pulled of a daring overtake into the Redgate. Hartland settled in for a secure third, whilst Fun Cup stalwarts Chris Hart and Henry Dawes muscled their way up the grid along with Adrian Ward, who again, proved capable in his striking Blue MK2 GTi. Hill absorbed the pressure from Colbourne, to take victory and the fastest lap, with Adam Hance holding third after some strong advances from James Howlison, Ryan Sayer and newbie John Beale. Hartland secured the MK2 title in Race 1, and Hill required a miracle to take the MK5 title.

Battles throughout the field in both races
Race 2 was a carbon copy of race one, with Chris Webb driving off into the distance with a master class display of MK2 race craft. 2018 Champion Tim Hartland settled for 3rd after some early dices with Hart, Ward and Milne. Sadly Dan Gibbs, could not continue due to mechanical issues, which left the 3rd spot battle in the hands of Pete Milne. Despite two race wins and one fastest laps, Webb was unable to retain his title. Webb secured second, with Pete Milne 3rd. Chris Hart took a well-deserved second on the podium, with a stunning drive. Despite his best endeavour’s, Simon Hill was unable to stop the infallible James Colbourne, who secured the 2018 MK5 title with another  second place of the day. Hance took the final podium step, and also managed to finish 3rd in the championship to Simon Hill who took 2nd, despite two amazing drives.

Usual nose to tail action throughout the field
The 2018 season has been an absolute pleasure to watch – The PGTI gang have put on a fine display of racing and it has been wonderful to watch. Thank you all for making PGTI the place to be, and we look forward to doing it all again in 2019!