The local shows how its done in hot and sticky conditions 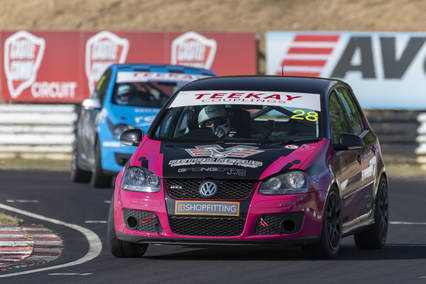 Local man James Colbourne was the man to beat
Supporting the popular TCR series, Production GTI rolled into Wiltshire for rounds 7 and 8 of the 2018 campaign. Fortunately for the spectators, there was an abundance of Ice Cream as temperatures reached record levels, which was good for ice cream sales, however not great for drivers enduring hugely high temperatures and having to manage tyres on the Uber fast Castle Combe Circuit.

The Mk2’s were on it from the outset in Qulaifying and putting in some very respectable times, some quicker than their younger Tubrocharged siblings in the MK5 Class. It was business as usual for Chris Webb who managed to qualify in the tops spot, withjust 2/10ths behind in second and Peter Milne taking a respectable 3rd in his fresh new car.

In the Mk5s it was no surprise that local men James Colbourne and Richard Marsh locked out the front row, with Walsh, Mawdsley and Howlison all a second behind. 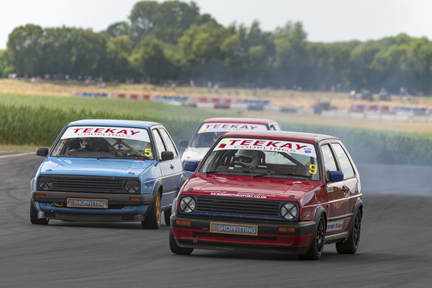 Tim Hartland in the red MK2 managed capitalise on Adrian Ward's off track excursion and took Race 1 victory
​Race 1 was as clean as ever with just Adrian Ward coming away with some minor scrapes after a demon start, he lost the impressive gains after a disagreement with the Armco on the exit of the chicane. This allowed Hartland to capitalise on the mistake and take Webb with him to the flag for another victory. Webb was so close behind, if they were fighter jets, they would appear as one radar blob! 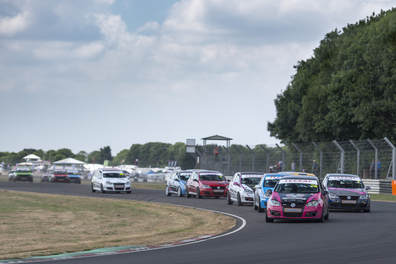 Colbourne led from start to finish in both races
​Colbourne led from lights to flag in the MK5 class, with Marsh capitalising on his local knowledge to take an impressive 3rd, in just his second meeting. Walsh took the second spot and tried to keep with Colbourne, however Colbourne was infallible as he lapped in a convincing and mature manner. Further down he grid, Blackburn, Hance and Howlison battled nose to tail and exchanging places every other lap, much to the crowds delight.  Youngsters and PGTI Freshman Ryan Sayer and Kevin Lloyd showed they will be the ones to watch after another display of skills, but the drive of the Race 1 goes to Peter Elliston, who showed a huge improvement and took the fight to the front runners. 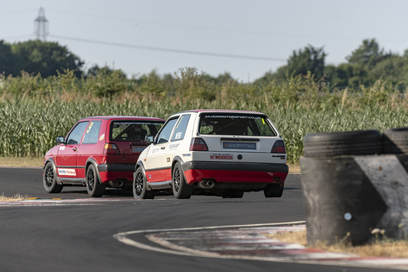 Hartland and Webb nose to tail again
In race 2, it was pretty much a carbon copy of race 1, with Hartland, Webb Gibbs and Milne fighting it out nose to tail. Wes Chatterton returned ( Now With Flames ) and showed he has still got it!
After an early battle with Gibbs, Milne displaced him to take 3rd and no matter what Webb did, Hartland made his car the widest VW ever. Hartland took his second victory of the day and Webb his second second. Mawdlsey managed to wiggle his way into 3rd for race 2, with Colbourne again taking and impressive lights to flags victory, with Walsh making second look easy and like a Sunday afternoon drive.