​The curtain has fallen on the 2016 Production GTI MK2 Championship and MK5 Series which created another exciting season of racing across some of Europe's best tracks.

Across both of the iconic hot hatch fields there has been a nine different drivers taking the top spot on the podium.

The MK5 series is only in its second year of existence, but it has seen new drivers and new winners throughout the season. With it being a series, all rounds are non-scoring so there isn't a championship table or an official champion, but if there were, it would have been a hard fought affair which would have gone down to the wire, as we have seen five different winners across eight races!

So how did it the season unfold throughout the year? 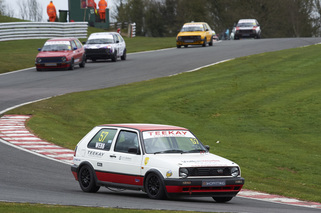 The MK2's started their season back in Spring at the undulating Oulton Park with the weather providing a mixed bag of dry qualifying and damp in both races. Adam Hance took pole in the dry session but due to gearbox issues was not able to make the first race. This left Chris Webb to take his maiden win from a chasing Chris Sanders and Tim Hartland. The second race saw Chris Webb make it a brace of wins, again with Chris Sanders closely following with Pete Milne in 3rd. Fastest qualifier, Hance started from the pitlane but managed to recover to 4th. Matt Petts started the season off perfectly with a double win and newcomer Dave Aldridge with a brace of second places. Paul Cowland managed 3rd in the second race. 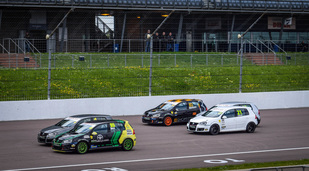 Rockingham was the next stop, where the MK2's were joined by the MK5's. Returning racer Nick Porter marked in entrance with a bang by taking both wins in MK2 Championship with Webb and Milne finishing both races in 2nd and 3rd respectively. The MK5's saw Andy Baylie take the first win of the year, followed by Josh Johnson and SimonGusterson. Race two saw the same top three re-shuffled with Johnson taking top spot over Baylie and Gusterson settling for 3rd again. Matt Petts continued in the 8v Class where he left off at Oulton adding another double win. Dave Aldridge and Wes Chatterton managed 2nd and 3rd respectively in both races. 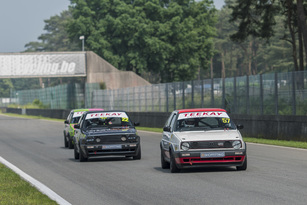 ​June - Zolder
​
Next up was an early summer trip for both the MK2 and MK5's was a trip to mainland Europe, to Belgium and the legendary Zolder track. In the MK2's Adam Hance not only saw his first ever win on the Belgian track but also his second by taking both wins from Chris Webb and Dave Parris in 3rd. The MK5 Series also saw a brace of wins from one driver, this time John O'Brien was the man to beat with Martin Walsh the nearest man finishing 2nd in both races and Josh Johnson taking 3rd in the first race and Paul Blackburn in the second race. The 8v class saw Wes Chatterton promote himself to the top spot in both races. 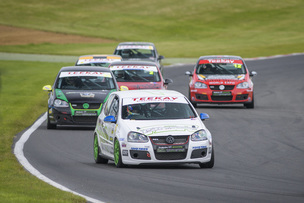 ​Now back on UK soil, Brands Hatch Indy was the venue for the next rounds for both the MK2 and MK5 hot hatches. The MK2's both finished the same with the returning Nick Porter taking the top spot, with Chris Webb 2nd and closely following Adam Hance. The MK5's saw Martin Walsh move up a step from his Zolder finishes to claim a double win on the tight Brands Hatch circuit. The constantly improving Charlie Cudlip broke into the top three with a 2nd and 3rd place and Josh Johnson filling the other podium slots with a 3rd and a 2nd. Newcomer Martyn Brown put the cat amongst the pigeons within the 8v class by taking both wins, with Matt Petts and Wes Chatterton taking 2nd and 3rd respectively. 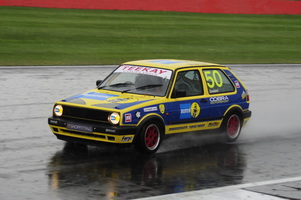 ​The annual trip to Silverstone was next on the short but frantic National layout. However rain was the order of the weekend and a lot of it thanks to late summer storms. Three of the four races were near enough raced in monsoon conditions where canoes may have been more appropriate. Charlie Cudlip took his double top three finish a step further by taking his maiden win and then his second win in his MK5 Golf. Andy Baylie and Martin Walsh brought their MK5's home in 2nd and 3rd respectively in both races. The MK2's were blessed with a dry track for their first race where Nick Porter took the win closely followed by Adam Hance and Chris Sanders. The second race was met with biblical rain and standing water where survival was the order of the day. Sanders improved on his race one finish by taking his maiden win of the year, followed by Porter and ever consistent Chris Webb. Returning Paul Cowland and Dave Aldridge took the 8v class first and second respectively with Matt Petts following up in 3rd in the first race. The wet 2nd race evened out the classes with Petts not only finishing 1st in class but 4th overall. He was closely followed by Dave Aldridge in 2nd, but 5th overall. 3rd spot was wrapped up by Wes Chatterton. 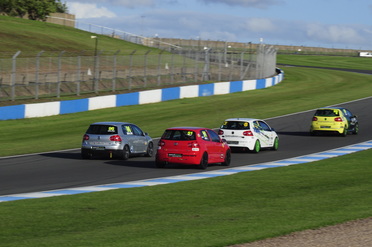 Then so it was, to final rounds of the season on the rolling hills of Donington Park with still the MK2 16v and 8v class champions still to be decided.

​The 16v class saw three drivers still in contention for the championship with Chris Webb, Adam Hance, and Nick Porter having it all still all to play for.
Within the 8v class two drivers were in contention with Matt Petts and Wes Chatterton due to battle it out.
With the MK5 only being a series, all rounds are non-scoring so there isn't a championship table or an official champion, however with new cars and drivers joining each meeting throughout the season the competition was always so tight that it was never going to matter that there officially wasn't any points on the table.

As it turned out despite Nick Porter taking the win and Chris Webb taking 2nd spot in race one, Webb was confirmed champion as soon as he had finished. Adam Hance finished 3rd to keep the fight for 2nd place in the championship going to the final race. What a final race it was with the top three positions changing several times, but it finally finished with Hance taking the win and 2nd place in the championship with Porter 2nd on the track and third in standings. Webb finished his maiden championship winning season with a third position.
​
The 8v championship was again wrapped up within the first race by Matt Petts, but not in a manner anyone would have hoped for. After rolling his car several times at the old hairpin he was unable to start the second race meaning that there was not enough points available for Wes Chatterton to take the championship. Martyn Brown continued his form from Brands Hatch with two class wins, with Paul Cowland adding a brace of seconds to his season tally. Chatterton managed third in the first race and Dave Aldridge finished third in the second race.

​Within the MK5's, Charlie Cudlip carried his form over from Silverstone with a double win. Newcomer for the 2016 season, Simon Hill finished a strong second followed by Martin Walsh in both races.
So now that the 2016 season has drawn to a close, congratulations to our champions and thanks to everyone who took part. The focus is already on the 2017 season with both the MK2's and MK5's back for some more close, clean and cost affective racing action. There will be more MK5's with several in build by newcomers and existing MK2 racers looking for that extra speed. The 2017 Calendar will be released soon along with other exciting news.